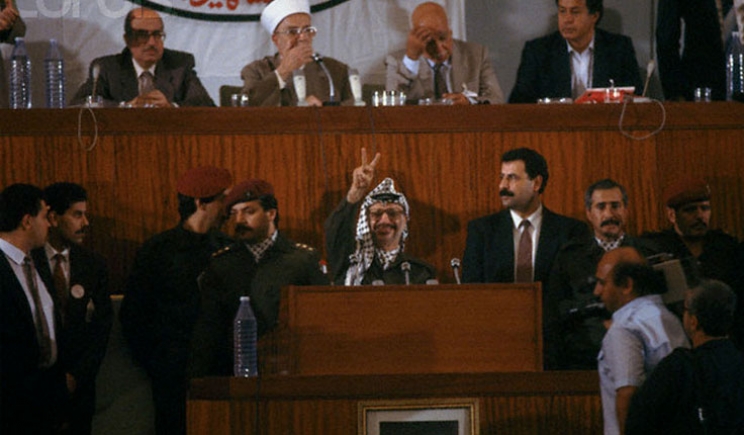 The PNC stressed that our people’s right for self-determination, return to homeland, national independence and the establishment of the independent state with Jerusalem as its capital considered the sole guarantee for achieving peace, security, stability in our region.

The PNC asserted in a statement marking the 28th anniversary of the Palestinian declaration of independence that our people’s struggle will continue without fear of the Israeli occupation, terrorism and will remain steadfast in their lands, looking forward to the Arab and Islamic peoples, their leaders and governments to bear their national Islamic responsibilities through offering actual support and backing to consolidate our people’s steadfastness with the aim of ending the occupation and achieving independence.

The PNC also called upon the United Nations to exert its efforts to implement its resolutions pertinent to Palestine calling upon the country which established the occupation and settlement in Palestine one hundred years ago and the countries that still protect the last occupation of the world to dessist from backing and supporting this nasty occupation and to acknowledge the responsibility for past injustices and gross mistakes inflicted on our people and exert every effort to get them rid of the Israel’s occupation which reneged on the agreements it signed. The statement affirmed that Israel mustn’t be free without ending its occupation of the land and recognition of the State of Palestine. As peoples are always ready to sacrifice for recovering their legitimate rights and living with dignity.

The PNC, on this national occasion, affirmed the fact of remembering and reviving the men’s stances and determination, martyr’s leaders sacrifices, first of all, the martyr’s leader Abu Ammar and thousands of martyr’s who lighted up the road for us, and save the national identity of our people and their national unity within the framework of the PLO, the sole legitimate representative of our people, which led the national struggle in all its stages and forms whether military, political, diplomatic, that is why all leaders and factions should revive and protect the PLO so as to enable it face future challenges since the PLO itself has preserved and protected the gun and national independent decision.

Pertinent to the subject, the Declaration of Independence was made in Algiers on 15 November 1988, at the 19th session of the Palestine National council, the highest Palestinian legislative authority. At that time 110 states had recognized the State of Palestine and in 2012 the UN recognized Palestine, a state under occupation, on the 1967 borders.