PNC: Independence Declaration established the stage for global recognition of the Palestinian state, with Jerusalem as its capital 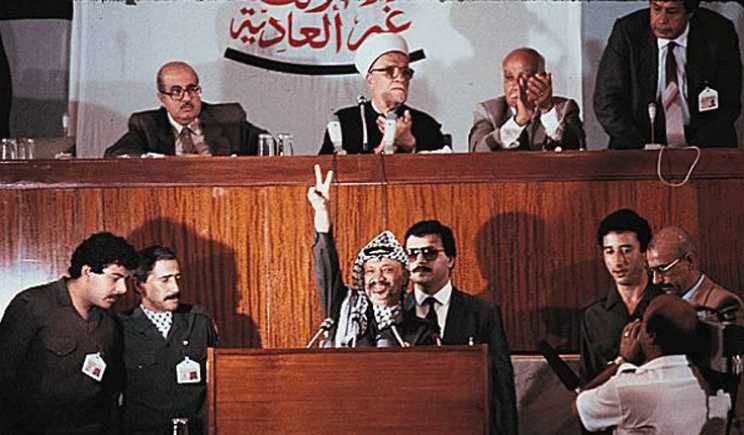 "The Declaration of Independence in 1988 established the stage for global recognition of the Palestinian state, and its capital is the city of Jerusalem. Palestinian national unity is the shortest way towards defeating the occupation and the return of our people to their land and self-determination on it, and the embodiment of this national independence, in accordance with relevant international legitimacy decisions", PNC sad.
In a statement issued on this occasion, which is tomorrow, Sunday, 15th of November, our Palestinian people continue to recall with pride and glory the martyr Yasser Arafat when he stood before the members of PNC in its 19th session held in Algeria, where he declared: “In the name of God and in the name of the Palestinian Arab people, I declare the establishment of the State of Palestine on our Palestinian land, with Holy Jerusalem as its capital”, PNC added
On this anniversary, PNC recalled the sacrifices of the martyrs, prisoners, and wounded of Palestinian people, and the sacrifices of the martyrs leaders, headed by the leader Abu Ammar, his brothers and companions, who illuminated the path towards independence and preserved national unity, within the framework of the Palestine Liberation Organization (PLO), the sole and legitimate representative of Palestinian people.
The Council said: The declaration of the Independence Document opened the way wide for the world’s recognition of the right of Palestinian people to establish their independent state with Jerusalem as its capital, where about 110 countries recognized Palestine at the time, followed by the United Nations’s recognition in November 2012, when General Assembly Resolution 67/19 was issued. Now the number of countries that recognized our state reached 141 countries.
In its statement, PNC affirmed what was stated in the Independence Document, that our people have never stopped brave defense of their homeland, and its successive revolutions and uprisings have been a heroic embodiment of the will of national independence. Palestinian people will continue this struggle until the independence becomes a reality, and Palestinian people return to their land. The aggression and racism of the Israeli occupation will never prevent and will never panic the Palestinian people.
The Palestinian people's rejection of all plans and projects aimed at liquidating its national cause and canceling its legitimate rights guaranteed by international legitimacy resolutions, expressing confidence in the ability of our people and its leadership headed by President Mahmoud Abbas, to protect these inalienable rights, PNC reiterated.
PNC renewed its call for the need for the international community and its institutions to bear responsibility, to take their role in implementing international legitimacy and its relevant decisions, and to move to the square of actions to force Israeli - the occupying state - to stop its aggression and end its occupation of the Palestinian people, in order to achieve peace, security and stability in the region and the world.
PNC called for the need to respond quickly to President Mahmoud Abbas's call to hold general elections, so that Palestinian people can exercise their right to choose whoever represents them, in a manner that guarantees saving the institutions and the legitimacy, and achieving reconciliation and national unity within the framework of the Palestine Liberation Organization (PLO).
PNC concluded its statement by saluting the members of our heroic Palestinian people for their cohesion and steadfastness in the face of the Israeli occupation.