The grave Israeli violations against Palestinian citizens of occupied Jerusalem 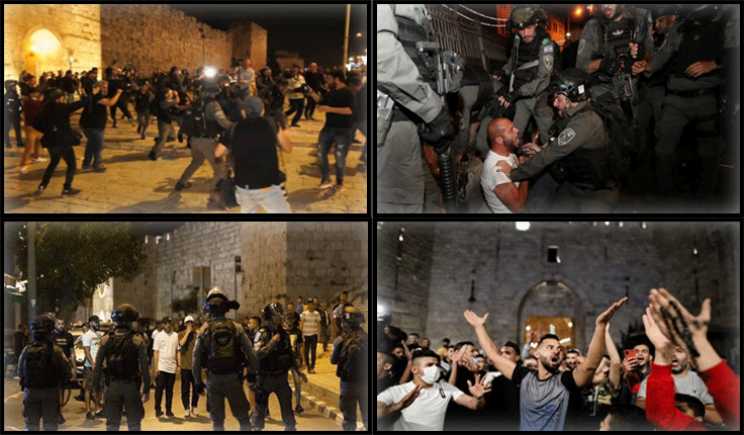 For the thirteenth consecutive day, the Israeli occupation and the settlers continue their grave attacks on Palestinian citizens in occupied Jerusalem and the vicinity of the blessed Al-Aqsa Mosque.
The Israeli occupation forces and hundreds of settlers participate in attacks on worshipers and their holy sites, preventing worshipers from accessing the holy sites, attacking and abusing Palestinian civilians, and attacking their homes, resulting in about 140 injured Palestinians and about 100 arrested Palestinians.
PNC would like to clarify that the violations came after racist incitement campaigns by Jewish terrorist groups such as "Lahava" against the citizens of Jerusalem. Nevertheless, the occupation did not move a finger to stop it, but rather provided protection for them.
The Israeli acts coincide with the continuing implementation of the ethnic cleansing scheme for Jerusalemites and displacement from their properties in Sheikh Jarrah, Al-Bustan and Batn Al-Hawa in the town of Silwan, in violation of the Fourth Geneva Convention and UN Security Council resolutions, especially Resolution 2334 of 2016.
Due to this escalation and serious violations against Palestinians, PNC urges you to shoulder your legal and moral responsibilities by declaring your frank positions regarding these repeated crimes and targeting unarmed civilians in the city of Jerusalem.
Therefore, we ask you to make your efforts to pressure your governments to provide urgent protection for Palestinian civilians in Jerusalem and the rest of the Palestinian territories, in accordance with UN General Assembly Resolution ES-10 / L.23 of 2018.
PNC calls on you to send a clear message to the Israeli occupation that its criminal violations fuel violence and hatred, and will drag the region into a religious war, in light of direct targeting and blatant abuse of religious beliefs and places.
We also urge you to commit the Israeli occupation to its responsibilities towards Palestinian civilians in accordance with the rules of international law, not to target their property, the holy city and its Palestinian Arab, Islamic-Christian identity, or to change the historical and legal status.
We would like to emphasize activating the principle of accountability, imposing penalties and not impunity is sufficient to deter the crimes and violations of the Israeli occupation, and that the fundamental solution to stop violations is to end the occupation of the lands of the State of Palestine and its capital, Jerusalem.