PNC: The settler “March of the Flags” in Jerusalem is a call for the continuation of aggression and terrorism against Jerusalemites 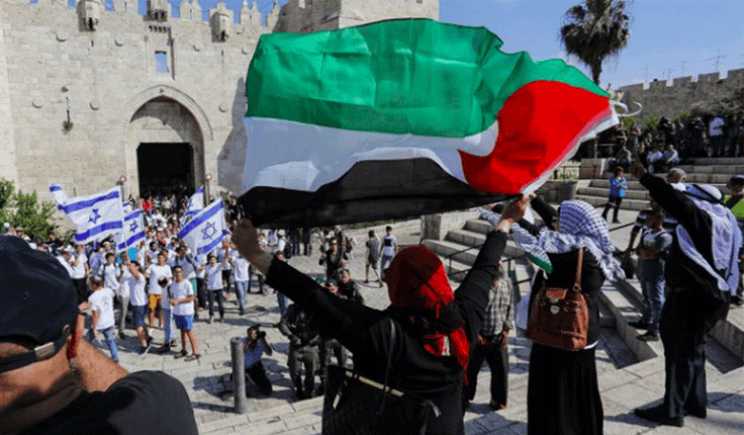 Palestine National Council (PNC) said that the insistence on organizing the so-called “March of the Flags” in the occupied city of Jerusalem is a call for the continuation of persecution, terrorism and aggression against our people in the city and its Islamic and Christian holy sites.

In a statement issued by PNC Speaker, Mr. Saleem Al-Za’anoon, today, that Palestinian people, Muslims and Christians, are capable of confronting and thwarting this process, just as they have thwarted with their defenseless body and solid will all previous attempts that targeted Christian and Islamic sanctities, especially the attacks on the blessed Al-Aqsa Mosque.

The prelude of the new Israeli occupation government, which is headed by the first supporter of settlements, who is one of the sponsors of the draft law to execute Palestinian prisoners in 2018, allowed these terrorist groups of settlers to organize this aggressive march in the vicinity of the blessed Al-Aqsa Mosque, and will provide security to protect the terrorist settlers, PNC confirmed. In return the Palestinians in Jerusalem are subjected to harassment, oppression and suppression.

PNC held the Israeli occupying government fully responsible - in accordance with its legal responsibilities as an occupying power - for all the repercussions that may result from this March, including the attacks on Palestinian people in the city of Jerusalem, and the safety of their lives and property.

The Council called on the international community, in particular the UN Security Council and the world's parliaments, to stop "the Israeli madness, led by terrorist groups from settlers, who have the full protection and support of the occupying government, which will lead to more instability in the region".

The policies of the Israeli occupation over 54 years of Judaization operations have failed to obliterate the features of the Arab Islamic and Christian city and its civilized identity, PNC added, and will not succeed in changing the legal status of the city of Jerusalem as an occupied Palestinian city, the capital of the Palestinian state, in accordance with the historical right of Palestinian people, and in accordance with the resolutions of international legitimacy related, the latest of which is UN Security Council Resolution 2334 of 2016.

It is worth noting that the settlers “March of the Flags” is carried out annually by the settlers under the protection of the Israeli occupation forces on the anniversary of the occupation of Jerusalem in 1967.