PNC: The Israeli occupation turning of Al-Aqsa Mosque courtyards into a war zone is a "complete crime", and holds the occupation responsible 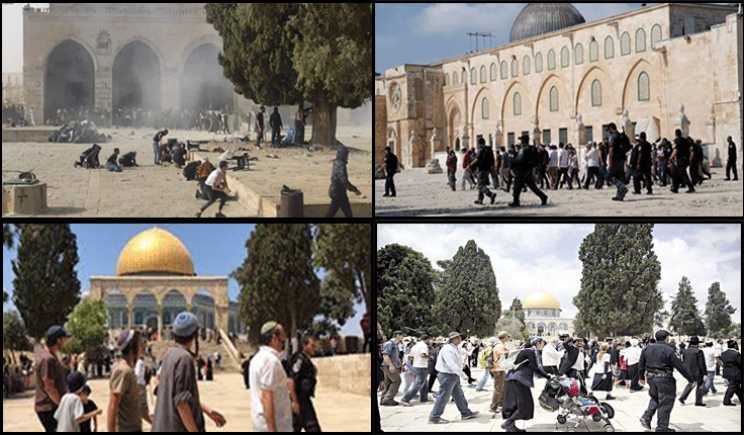 Palestine National Council (PNC) issued an urgent appeal to the Arab and Islamic parliaments to assume their responsibilities towards what is happening in the city of Jerusalem and the blessed Al-Aqsa Mosque of aggression and desecration by extremist settlers, in full partnership with the Israeli settlement government, whose Prime Minister Naftali Bennett ordered to continue storming, assaulting worshipers, and violating the sanctity of the place.

In a statement issued today, Sunday, PNC said that the Israeli occupation authorities, on the occasion of the so-called anniversary of the alleged “Destruction of the Temple” turned the vicinity of the Old City into a military barracks, closed all entrances of Al-Aqsa Mosque, and forbidden entry to it in conjunction with the settlers’ incursions, at a time when the occupation authorities assault the worshipers, and arrest dozens of them, in order to provide protection to the settlers, and trying to impose Judaizing policies in Al-Aqsa Mosque.

PNC stressed that the occupation forces’ transforming the sanctity of the place into a battlefield in the blessed days that precede the blessed Eid Al-Adha, the brutal attack and the expulsion of worshipers by force from inside Al-Aqsa is “a full-fledged crime, and a blatant challenge to all international values and covenants, which prevent prejudice to places of worship. PNC holds the occupation government fully responsible for all the serious repercussions of these incursions.
The council added that all the repeated and systematic incursions into Al-Aqsa Mosque reflect a blind madness of the Israeli extremists and the settler government, PNC added, that’s in a blatant provocation of the religious and patriotic feelings of the Palestinian people, and about two billion Muslims, which proves the falsity of the new (Abrahamic) initiatives, which aim to legitimize the occupation utilizing misleading and deceptive titles, to seize the Al-Aqsa Mosque and build the so-called "Temple".

PNC addressed all Jerusalemites and Palestinians with a salute of pride and reverence, who std to defend Jerusalem and Al-Aqsa Mosque, praising their steadfastness and courage, and confronting the occupation forces with their unarmed bodies and their strong will to deter the occupation and settlers, and thwart their plans to Judaize Al-Aqsa Mosque.

PNC saluted the advanced and pivotal role led and played by Jordanian King Abdullah II bin Al-Hussein, the owner of the Hashemite custodianship over the Islamic and Christian holy sites in Jerusalem, in defending the Palestinian rights and protecting Al-Aqsa Mosque from Israeli violations and attempts to Judaize it. PNC highly appreciates the great sacrifices provided by the brotherly Jordanian people, and the continuous support of the government and parliament of the Kingdom of Jordan for the rights of Palestinian people, and the defense of Al-Aqsa Mosque, and facing the Israeli attempts to divide it.

In this regard, PNC affirmed that Jordan and Palestine, at all levels, are in the same advanced trench of confrontation to thwart all projects and conspiracies targeting Palestine and the Islamic and Christian holy sites in Jerusalem, and try to prejudice the legitimate rights of Palestinian people to return, liberate, and establish an independent Palestinian state with Jerusalem as its capital.

PNC said that the continuation of these incursions and attacks on Jerusalem and its sanctities requires the Arab and Islamic nations and its institutions, especially the League of Arab States and the Organization of Islamic Cooperation, to elevate their positions to take practical measures to implement their political, financial and media decisions to protect the city of Jerusalem, support the steadfastness of Jerusalemites, and strengthen their struggle in facing the policies and the escalating occupation measures, including demolishing homes, and attempts to implement forced displacement in the neighborhoods of Jerusalem and its occupied towns.

PNC also called on the UN Security Council to assume its political and legal responsibilities, to intervene to stop Israel’s crimes, to hold it accountable for it, and to take urgent measures to provide protection for Palestinian people, whose life and Islamic and Christian sanctities are exposed to daily aggression from the occupying power, which continues its colonial project without any commitment to the principles of international law and human rights charters, which criminalize attacks on sanctities and the violation of the right to worship, ignore all international resolutions which affirm that the city of Jerusalem is an occupied Palestinian land, from which Israel must withdraw, like all other Palestinian territories occupied in 1967.