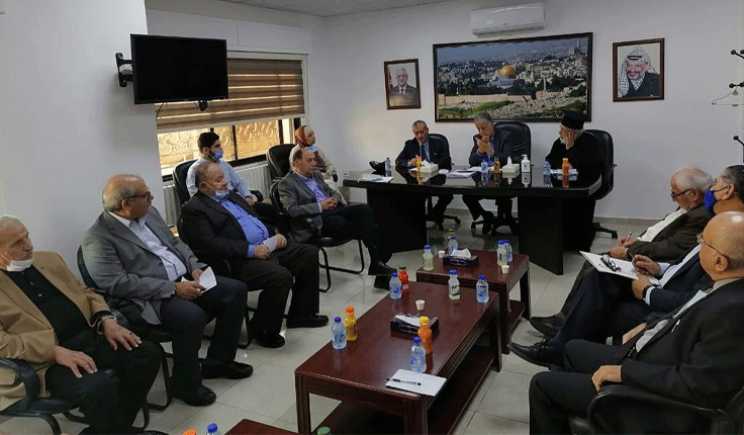 On the anniversary of Balfour Declaration, Palestine National Council (PNC) called on the international community and its institutions, especially the Security Council, to hold the Israeli occupation accountable and to impose political, economic and diplomatic sanctions on it to end its occupation and settlement, in accordance with UN Security Council Resolution 2334 of 2016.

This came during a meeting held by PNC Political Committee, with the participation of PNC Vice-President, Father Constantine Qarmash, and the PNC Secretary, Muhammad Sbaih, under the direction of PNC Speaker Mr. Saleem Al-Za’anoun, on the occasion of the 104th anniversary of Balfour Declaration in 1917, where the anniversary came this year in line with the open colonial settlement war against everything that is Palestinian.

At the conclusion of their meeting at the PNC headquarters, the conferees affirmed that the crime of Balfour Declaration was the beginning of a colonial policy that established all crimes committed against the Palestinian people. Balfour Declaration is a dangerous precedent in history, and is considered - according to the provisions and rules of international law - a full-fledged crime, which led to the uprooting and displacement of more than half of the Palestinian people from their land, in a process of ethnic cleansing, during which hundreds of bloody massacres were committed against the Palestinian people, who are waiting - until now - to punish the perpetrators of the massacres.

The conferees called on all communities, events, unions, institutions and members of PNC in the homeland and the diaspora to interact with the President's decision to half-mast the flags on this painful anniversary, because of its implications and messages confirming the Palestinian people's rejection of that colonial declaration, which is the main reason for the series of crimes and violations committed against our people 104 years ago.

The attendees called on the British government to assume its legal, humanitarian and moral responsibilities for its sin against the Palestinian people, calling on the British people, the House of Commons and the Lords to bear the responsibility of obliging their government to correct the grave committed mistake, to acknowledge its international legal responsibility, and to implement the principle of repairing the damage it caused to the rights of Palestinians, including an apology to the Palestinian people, compensation, and recognition of the State of Palestine on the borders of June 4, 1967, with occupied Jerusalem as its capital.

PNC conferees explained that the
occupying power - amid international silence - is continuing to complete the implementation of the colonial Balfour Declaration, to deprive our people of their right to self-determination, their return to their land, and the establishment of the independent state with Jerusalem as its capital. And they demand that the occupation government be obligated to stop its destructive settlement policies, house demolitions, forced displacement, and confiscation of land, especially in the occupied city of Jerusalem, which has not even spared its cemeteries from assault, with the aim of Judaizing, as is happening now in the Yusufiya cemetery, and this is accompanied by a fierce ethnic cleansing campaign in the city, in addition to the continued killing, arrest and abuse of prisoners,especially hunger strikers, in refusal to administrative detention.

The conferees also stressed that the terrorist government of settlers, led by Naftali Bennett, is waging an open war on the future of our state, through its colonial project throughout the Palestinian territories, to rupture its geographical contiguity, prevent the establishment of an independent and sovereign Palestinian state with Jerusalem as its capital, and established an apartheid regime that is documented by many specialized reports worldwide, but without accountability or punishment for its actions that amount to war crimes, and crimes against humanity.

The meeting participants held the international community and its institutions, especially the UN Security Council, the legal responsibility for implementing the relevant international legitimacy resolutions, leaving the square of silence and shy condemnation that encourage the Israeli occupation to continue its crimes, holding it accountable and imposing political, economic and diplomatic sanctions on it to end its occupation and settlement, in accordance with UN Security Council Resolution No. 2334 of 2016. It is not possible to guarantee all of this, without activating the provisions of international law, to ensure the implementation of the resolutions of international legitimacy that enable the Palestinian people to enjoy their full inalienable rights, leading to peace and stability in the Middle East.

The conferees called on the Arab and Islamic nations and their institutions, especially the League of Arab States and the Organization of Islamic Cooperation and their parliaments and governments, to shoulder the historical responsibility and carry out their duties by providing financial, political and media support to the Palestinian people, as approved by the Arab and Islamic summits, to confront the Israeli occupation policies and its violations in Palestine, because the occupation government did not spare any kind of crimes, terror, settlements and persecution to practice against our people, as the situation has become dangerous and cannot tolerate this inaction and the failure of Arab institutions in their duties, while the occupation government and the settler groups are spending huge sums of money to Judaize Jerusalem and build settlements.

The meeting participants saluted the legendary steadfastness of the prisoners and heroic detainees, led by the hunger strikers, the oldest of whom is Kayed Fasfoos, who has been on strike for 111 days, Miqdad Al-Qawasma, who is facing the death, and his colleagues , Hisham Abu Hawash, Shadi Abu Akar, Ayyad Al-Heraimi, and Lou’ay Al-Ashqar. The meeting participants demanded for the necessity of making all efforts to put an end to the prisoners and detainees suffering by releasing them from the Israeli occupation prisons.