PNC on Palestinian People International Solidarity Day: Palestinian rights are confirmed, inalienable and will not go away 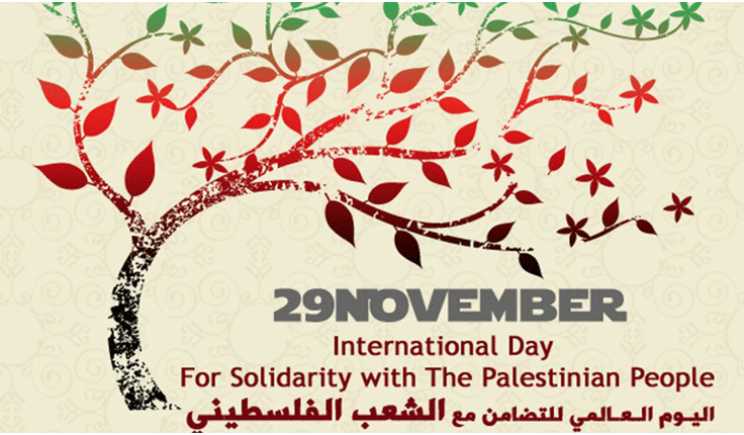 The Palestinian people International Solidarity Day was established to coincide with the date of the issuance of the unjust partition resolution No. 181 (D-2), on November 29, 1947, which stipulated the dividing of Palestine into two states, the termination of the British Mandate and the establishment of a Palestinian Arab state on 42.3% of the land of historical Palestine, and a Jewish state on 57.7% of the land, and Jerusalem was placed under international trusteeship.

In a statement issued on this occasion, Palestine National Council (PNC) said: The United Nations and the countries - especially Britain - that stood behind Israel and forcibly implemented the second part of Resolution 181, and denied and prevented for 74 years, the implementation of establishing of the Palestinian state in accordance with the same resolution; It must assume its legal and moral responsibilities and the implement of the other part of the decision regarding the establishment of a free and independent state of Palestine with the city of Jerusalem as its capital.

In its statement, PNC continued: The International Solidarity Day is on the same day but on a different year, that is, on November 29, 2012, the UN General Assembly approved Resolution 19/67, with a majority of 138 countries, which granted Palestine the status of a non-member state of the United Nations, and based on the basic resolution that established the Palestinian cause, which is Resolution 181 (Session-2).

PNC added that the designation of the International Solidarity Day with Palestinian people, and the acceptance of the State of Palestine as a non-member state in the United Nations system and its specialized subsidiary organizations, come to confirm that Palestinian national rights are protected, immutable, inalienable, and attached to the Palestinian people and will not disappear and end with the passage of time.

In its statement, PNC added that despite all those years of displacement, mass expulsion, confiscation of land, and attempts to exterminate the Palestinian people and erase them from the world population records by Judaizing and Israelizing the Palestinian land, cultural and civilizational heritage.

The Palestinian people remained firmly committed and insisted on steadfastness on their national soil, and resisting for their legitimate and inalienable rights, removing the occupation, gaining independence and all rights which are protected by the international law, in addition to self-determination, and the embodiment of the independent national state with national sovereignty.

PNC called on the parliaments of the world and its federations to declare their effective solidarity with the rights of Palestinian people, condemn the Israeli occupation and its colonial settlement policies, and impose sanctions on the Israeli Knesset, which legislates these policies through laws and decisions that violate the goals and objectives of international law, and the objectives of those unions. And calling for action in the decision of solidarity with Palestinian people, and addressing the Secretary-General of the United Nations and international human rights organizations, to lift the injustice against Palestinian people, end the occupation, and enable the Palestinians to obtain all their rights.

On this occasion, PNC called for expanding the circle of international solidarity with the Palestinian heroic prisoners and detainees in the prisons of the Israeli occupation, and to save the lives of the four prisoners who are on hunger strike: Hisham Abu Hawash for 104days, and Louay Al Ashkar. on strike for 49 days, those who are facing, with firm will and empty stomachs, the policy of administrative detention against them and against hundreds of their colleagues without charge or trial.

PNC saluted steadfast Palestinian people on their land, in places of refuge, and in the diaspora, for their continuous sacrifices and adherence to their rights.

PNC also saluted the global solidarity movements, foremost of which is the global boycott movement (BDS), calling for the need to strengthen ties and relations with, and implement the decisions of PNC and Central Councils related to activating the comprehensive boycott with Israeli occupation.