PNC on The Land Day: The policies of the Israeli occupation will not succeed in uprooting Palestinian people from their land 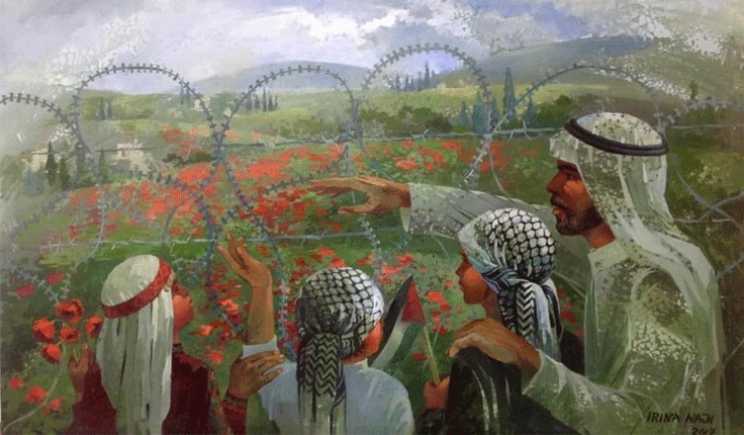 The Palestinian National Council (PNC) said that the revival of Palestinian people inside and outside the homeland to commemorate the eternal Land Day confirms the eternal connection to the land, the permanent readiness to defend it, self-determination and return to the homeland, and the establishment of the independent state with the occupied city of Jerusalem as its capital.
In a statement issued today, Wednesday, on the occasion of the 46th anniversary of the Eternal Land Day, PNC added that our people adhered to their land in which they lived generation after generation for thousands of years, despite the policy of forced displacement, ethnic cleansing, demolition of homes, the application of racist laws, and other tools of oppression, killing, arrest and attempts to abolish the Palestinian presence, implemented by the Israeli occupation governments for nearly 74 years.
The statement recalled the sacrifices of Palestinian people in the lands of 1948, who defended - and still do - their land in the face of the confiscation and annexation, where the spark was in the Galilee, the Triangle villages and the Negev on the 30th of March 1976, in response to the decision of the Israeli occupation to seize 21 thousands dunams of the lands of those cities, where six Palestinians were killed.
All these colonial policies and measures did not succeed in uprooting our people and displacing them from their land, PNC added, but rather increased them while they are insisting on confrontation and steadfastness, hence the number of the Palestinian people increased to reach about 13.8 million, of whom about 7 million are in historic Palestine, and the rest live in refugee camps and the diaspora, and waiting the Return to their lands and properties from which they were displaced by the Israeli massacres and terrorism.
PNC called for doubling all forms of support for the Palestinian people in the occupied city of Jerusalem, who are steadfastly and consistently engaged in daily battles with the Israeli occupation and settlement organizations, to protect their lands and properties, especially in the Old City, the vicinity of Al-Aqsa Mosque, Sheikh Jarrah neighborhood, and the neighborhoods of Silwan, which are exposed to an open colonial war, with the aim of eliminating the Palestinian presence there, obliterating its Arab-Palestinian history and identity, and replacing them with settlers.
The statement stressed that all the occupation’s appropriation of land and building settlements on it is considered an attack on international law, and a flagrant violation of international legitimacy resolutions, the latest of which is United Nations Security Council Resolution No. 2334 of 2016, which called for halting all forms of settlement in the occupied Palestinian territories, which destroys the foundations of the establishment of an independent Palestinian state with Jerusalem as its capital.
PNC called on the international community, its institutions and countries, to stop following the policy of double standards and selectivity in applying the rules of international law and United Nations resolutions, and not to exclude the long-term Israeli occupation of Palestine, and to ensure compliance of the occupation with its legal obligations, in accordance with the Fourth Geneva Convention and its annexed protocols, and to impose sanctions on Israel to force it to implement the decisions of legitimacy. international law, that will guarantee peace and stability in the Middle East.
PNC called on also the parliaments of the world and its unions, led by the Inter-Parliamentary Union, to put pressure on the Israeli Knesset and impose sanctions on it, as it is a partner of the occupation government in its colonial policies and measures against the Palestinian land and its owners, through its laws that try to justify occupation by using legal concepts and terms that seriously violate The Hague Convention of 1907, and the Fourth Geneva Convention of 1949.
On this immortal occasion, PNC salutes the Palestinian people in all their places of residence, led by the heroes of the popular resistance who are fighting their battle in all the sites of engagement, to defend their land, offering great sacrifices from the martyrs, wounded and prisoners on the path to freedom, in order to achieve the goals of the people to return and establish the Palestinian independent state, with the city of Jerusalem as its capital, in accordance with the relevant international legitimacy resolutions.
It should be noted that the Israeli occupation is exploiting, by force, more than 85% of the area of historical Palestine, which amounts to about 27 thousands km2, while the percentage of Palestinian population in it is currently about 50%, knowing that the Jews during the British Mandate period exploited only 1,682 km2, which constituted 6.2% of the land of Historic Palestine.