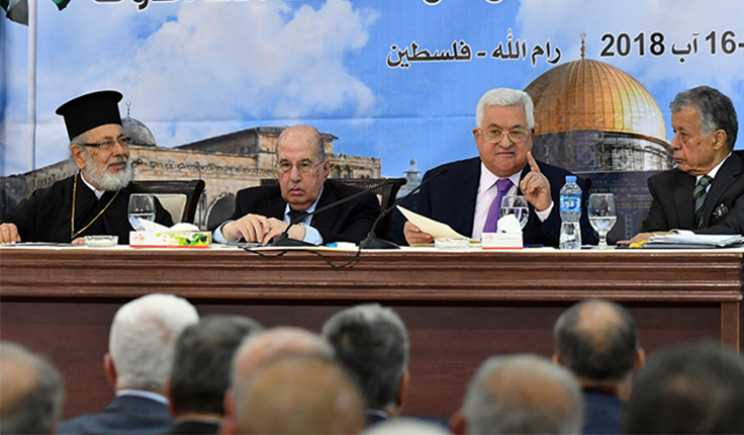 The Palestine liberation Organization’s Central Council held its 29th ordinary session, under the name “ Martyr Razan Al-Najjar and the Transition from Authority to State “, between 15-17 Aug.2018 at the presidential headquarters in Ramallah City, in the presence of President Mahmoud Abbas.

After concluding its session, the PCC issued the following statement:-

First : Stressing the continued position of rejection the so-called “ Deal of the Century “ confronting it with all available means, labeling the American administration as a partner to the Israeli occupation government and part of the problem rather than the solution, emphasizing the continuation of severing of political relations with the US Trump administration until it retracts its illegal decision on recognizing Jerusalem as the capital of Israel, Palestinian refugees, and illegal Israeli settlement.

Adhering to the call for an international conference with full powers under collective international auspices, including the five permanent members of the Security Council on the basis of the relevant resolutions of the United Nations, adhering to the 2002 Arab peace initiative in Beirut, the vision of president Mahmoud Abbas which was presented to the Security Council on February 20,2018, and rejection of transitional solutions, especially in the context of proposing suspicious schemes aimed at separating the Gaza Strip.

Second : Restructuring the relationship with the Israeli occupation government.

• The Central Council affirms that the relationship between Palestine and Israel is a relationship based on the conflict between the Palestinian people and their occupied state and the occupying power.
• The Central Council stresses that the direct goal is the independence of the State of Palestine, which requires transition from self-governing to the stage of a state that is struggling for independence, with East Jerusalem as its capital and on the borders of 4 June 1967,in implementation of the resolutions of the National Council including the Declaration of Independence in 1988, and relevant UN resolutions, including the General Assembly resolution 67/19 of 29/11/2012, as the political and legal basis for Palestinians reality, and the affirmation of adherence to the territorial unity of the State of Palestine, and the rejection of any divisions or facts imposed contrary to that;
• The PCC approved the recommendations submitted by the Executive Committee of the Palestine Liberation Organization to implement the decisions of the National Council, “ including the suspension of recognition of the State of Israel until it recognizes the State of Palestine according to the June 4, 1967 borders, with its capital in East Jerusalem, the cessation of security coordination in all its forms, economic separation on the grounds that the transitional phase, including the Paris Protocols, no longer exist, and on the basis of identifying the pillars and steps to start the process of transition from the phase of authority to embodying the independence of the sovereign State”.

Third : The PCC approved the PLO Executive Committee on Jerusalem, including the issuance of a presidential decree endorsing the new structure of the Supreme National Committee for Jerusalem, emphasizing that it is the only reference to the Palestinian national action in all its forms in Jerusalem and restricting of the capital’s secretariat.

Fourth : The Central Council approved decisions submitted by the Executive Committee to represent women by at least 30% in all institutions of the PLO, the State of Palestine and the Palestine Authority in order to achieve full equality in accordance with National Council decisions.

Fifth : The Central Council ratified the Executive Committee decision to form a higher committee to activate and develop the PLO departments, and maintenance of their independence.

Sixth : The Central Council approved the establishing of a higher committee for the preservation of UNRWA, continuation of exerting every effort to provide the necessary funds so that it can fulfill its responsibilities towards the Palestinian refugees until the refugee issue is resolved in all its aspects.

Seventh : The Central Council approved the Gaza Committee’s working plan on the Gaza Strip situation, demanding its full implementation with the aim of achieving political partnership, ending division, enabling the government of national reconciliation to exercise its responsibilities and powers according to basic law.

- The Council rejected all suspicious schemes aimed at separating the Gaza Strip from the West Bank, including East Jerusalem, the eternal capital of Palestine, as part of the deal of the century.
- It said that truce with the Israeli occupation power is national responsibility of the Palestine liberation Organization as the sole legitimate representative of the Palestinian people and not an action for the factions, as was the case in the Palestinian-Israeli indirect negotiations in 2014 that were based on the Egyptian initiative to stop that Israeli aggression on the Gaza Strip, or to propose humanitarian projects, airports and seaports outside the borders of the State of Palestine in order to destroy the national project and the liquidation of the Palestinian cause, it asserted that there will be no state in the Gaza Strip or a state without the Gaza Strip.
- It also called for the immediate cancellation of the measures taken on the salaries and benefits of Gaza Strip employees and their equal treatment with the rest of the Palestinian Authority employees.

Eighth : The Central Council appreciated steps taken by the State of Palestine led by President Mahmoud Abbas at the regional and international levels, especially in the UN General Assembly, after the use of veto by US president in the Security Council, Human Rights Council, the official referral to the International Criminal Court on war crimes committed against our Palestinian people in the occupied State of Palestine ( the West Bank, including East Jerusalem and the Gaza Strip), and filing a formal complaint with the UN Committee on Elimination of racial Discrimination.

Ninth : The Central Council decided to work to provide international protection to the Palestinian people, achieve full membership of the State of Palestine in the United Nations, the recognition of the State of Palestine by states that have not yet recognized it on the 1967 borders with East Jerusalem as its capital.
The Central Council called for activating the resolutions of the 1980 Amman Summit, which obliges the Arab states to sever all ties with any state that recognizes Jerusalem as the capital of Israel or transfers its embassy to it.

Tenth : The Central Council approved the comprehensive plan submitted by the PLO Executive Committee concerning popular resistance in cooperation with all concerned parties, including the National Council’s Popular Resistance Committee.
The Central Council affirmed adherence to our right to resist the occupation by all means, in accordance with the international law.
The Council highly appreciated heroic return marches in the Gaza Strip, and steadfastness of Al-Khan AlAhmer local Council calling for its continuation throughout the occupied Palestinian state, especially in places threatened with ethnic cleansing and demolition.
The Central Council called upon all national forces and factions to put all their energies and powers into the mobilization of the popular resistance and to expand its circle of participation to represent the broadest sectors of our people and their political and social components. It also paid tribute to the martyrs and their families, the wounded and the prisoners.

Eleventh : The Central Council reiterated its call to world countries to implement Security Council resolution 2334 (2016), paragraph 5, adopt the Danish Parliament’s and the Irish Senate’s resolutions as examples and expand the boycott of Israeli products by providing national, Arab and friendly countries’ alternatives.

Twelfth : The Central Council emphasized the need to support and back BDS movement and called on world countries to impose sanctions on Israel, especially in light of the racist law recently adopted by the Israeli Knesset.
The Council designated 19 of July (the adoption day of the racist law) by Israel’s Knesset as an international day to fight and topple the Israeli apartheid regime.

Thirteenth : The Central Council salutes the struggle and steadfastness of the prisoners in the Israeli jails and calls on national and international institutions to bring up their cases in all forums until their release. The Council condemns the arrest and intimidation of children, deliberate killings and field executions, detention of the bodies of Martyrs, denying the return of the deportees from the Church of the Nativity. The Council absolutely rejects the American decision ( the Toylor-force Act), and the Israeli government’s decision to deduct the allowances of the martyrs’ families, prisoners and wounded from the Palestinian clearing in flagrant violation to international law.

Fourteenth : The Central Council salutes the masses of Palestinians in refugee camps and exile camps in Syria, Lebanon and the Diaspora who affirm their adherence to the right of return, appreciated president Mahmoud Abbas decision on starting reconstruction of the Yarmouk camp and the Palestinian revolution’s martyrs’ cemetery in coordination with Syrian brothers, and continuing the reconstruction of Nahr-el-Bared Camp.

Fifteenth : The Central Council affirms the need to preserve the freedom of expression, publication, assembly, demonstration, and other rights of citizens guaranteed by the Declaration of Independence and Basic law, in harmony with the State of Palestine accession to various contractual agreements, protection of the independence of judiciary and the rule of law.

Sixteenth : The Central Council instructs the PLO Executive Committee to continue working to remove differences between PLO factions, in order to affirm their national partnership within the framework of the PLO, its departments and institutions and resolve their differences within these institutions.